AN ENDURING LEGACY: MASTERPIECES FROM THE MITCHELL MUSEUM AT CEDARHURST

This extraordinary permanent collection of American paintings, works on paper, and sculpture owned by the Mitchell Museum at Cedarhurst Center for the Arts has made Mt. Vernon, Illinois one of the most remarkable small towns in the United States. The collection was formed in the 1940s and 1950s by Eleanor and John R. Mitchell, a prosperous Mt. Vernon couple, who acquired major examples by Thomas Eakins, Mary Cassatt, Childe Hassam, John Singer Sargent, George Bellows, Robert Henri, William Glackens, and others. These artists are now recognized as some of the most crucial figures in the development of American painting.

The most exceptional paintings in Cedarhurst’s permanent collection are by artists who trained in Europe in the late 19th or early 20th century – Cassatt, Eakins, Hassam, Sargent, and J. Alden Weir, for example – but who remained deeply committed to the values and beliefs central to the American experience as they knew it.

Central to the Cedarhurst collection are the works acquired by State Senator John J. Parish. Parish was a businessman and state senator from Centralia, Illinois, and often visited Chicago’s art galleries. Strolling through the galleries of the Art Institute of Chicago in 1941, Parish spotted a landscape watercolor by a relatively unknown, twenty-four year old artist named Andrew Wyeth. He bought Winter Furrows, a major work on paper by Wyeth that day from the Art Institute’s annual watercolor exhibition. Wyeth has since become considered one of America’s greatest artists.

It may have been the encouragement of John Parish that led another Centralia, Illinois resident, the senator’s good friend, and the publisher of the local newspaper, S. Alden Perrine, to become interested in American art. In late 1944 or possibly January of 1945, Perrine bought Thomas Eakins’s 1886 masterwork, Professor George F. Barker from the Babcock Galleries in New York City.

By the 1950s, a handful of families in this farming and coal-mining region owned works of American art that were becoming increasingly sought after by museums and art galleries.

In 1973, the Mitchell Museum at Cedarhurst Center for the Arts opened to the public, with the Mitchell’s collection of American paintings and drawings as the centerpiece of a vital new institution.T 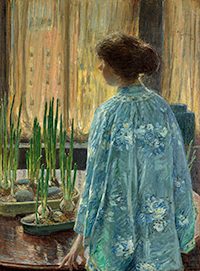